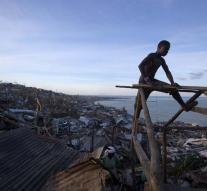 chantal - The number of deaths in Haiti by Hurricane Matthew has risen, according to local authorities to 877. It is now clear that certain 175 people have died in remote villages.

The havoc by storm is huge. Tens of thousands of Haitians homeless and cholera has broken out in some places. The authorities are still more than 61 000 people in shelters.

Clinics in rural areas have their hands full with wounded who sometimes walk around for days with broken bones or other injuries. Because roads are flooded, aid workers are struggling to reach some places.

Residents are therefore particularly dependent on each other for help. ' My house was destroyed, so I catch people. It's just a temporary shelter, '' Bellony Amazan says the village Cavaillon, where about twelve people were killed.