Home / World / Matthew claims 26 lives on their way to US 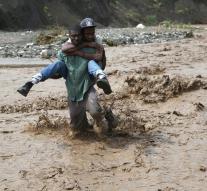 - Hurricane Matthew has thus far been 26 people killed. The powerful storm swept the Caribbean with winds up to 230 kilometers per hour. The many floods and effects of the storm led to four deaths in the Dominican Republic and 22 in Haiti.

After the Caribbean Matthew is expected during Thursday reached the southeastern states of the USA. Residents of those states fled inland or store large supplies of food and gasoline.

President Barack Obama and governors of several states called millions of inhabitants to evacuate. The eye of the storm still aansterkt expected to attract over Florida on Thursday. Meteorologists can not specify where Matthew will cause the most damage. The hurricane draws in the night between Wednesday and Thursday over the Bahamas where it is expected to get stronger still. Thursday Florida can prepare themselves for powerful shock winds, storm surges and heavy rainfall.

Meanwhile, the evacuations began, and several gas stations reported that the fuel runs out.