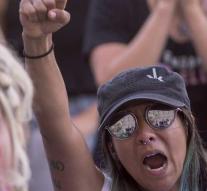 washington - In the United States, tens of thousands of people across the country have taken to the streets on Saturday to protest against the immigration policy of the Trump government. The biggest demonstration was in Washington, where, according to the organizers, more than 30,000 people participated. But also in cities like New York, Philadelphia, Chicago and Los Angeles thousands of people came to the protest meetings, including celebrities like John Legend and Cher.

The demonstrations were organized under the title Families Belong Together. The participants demanded that families of illegal migrants are no longer locked up and that children who are separated are immediately reunited with their parents. They also demanded that President Donald Trump stop his policy of automatically prosecuting migrants who are arrested for illegal border crossing.

Many protesters carried signs with texts such as 'Shame!', 'Make America Humane Again' and 'Immigrants Are Welcome Here. '