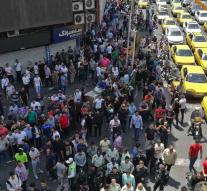 teheran - Retailers and traders from the Grand Bazaar of Tehran have massively argued Monday and demanded a clear trade policy from the government. The Tehran bazaar is a huge neighborhood that is seen as the heart of the Iranian middle class.

The ISNA press agency reported that there was no more activity in the bazaar and that the traders were demonstrating on squares. They shouted that they lose money if they stay open. The riot police patrolled the bazaar.

Iran suffers mainly from US economic sanctions, corruption and poor economic policies. The Iranian currency the rial is constantly decreasing. Attempts by the government of President Hassan Rohani to halt the fall of the rial have so far yielded nothing.

Especially the decision in early May of US President Trump to withdraw from the international agreement with Iran and to impose heavier sanctions was a blow to the Iranian currency and economy. The agreement stipulates that the major powers withdraw their sanctions against Iran while Iran restricts the nuclear program in a verifiable way.