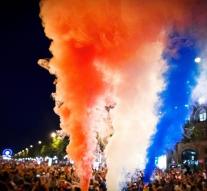 - Paris prepares for a massive celebration of the end of the European Football Championship. It is in Paris 'Les Bleus' Sunday in the suburb of Saint-Denis beat Portugal.

The famous Champs-Élysées is closed to traffic and flows are expected Sunday evening after the match full of fans. There are 3,400 police officers deployed to maintain order. There are 1,400 people in line for the security of the Fan Zone on the Champs-de-Mars, one kilometer south.

The national team Monday around lunch time expected at the Elysee Palace by President Francois Hollande, according to reports from the newspaper Le Figaro. If Hollandes guests won the European Championship, following Monday around 16. 00 hours a triumph of the team of Didier Deschamps on the Avenue Foch. Which is extremely broad, ranging from the square of the Arc de Triomphe to the southwest.