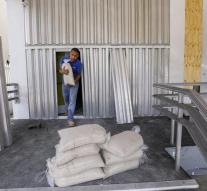 miami - The US authorities urge 650,000 people to leave their homes in and around Miami. It is the biggest evacuation in the region's history, said Mayor Carlos Giménez of the Miami-Dade County.

In the area, about 5.5 million people live. While Hurricane Irma approached the coast, the authorities opened numerous emergency shelters. They also provide free bus services to those centers. The city's airport is still open, but many flights have been removed.

The hurricane is expected Sunday morning early (local time) to land in southern Florida. In the state, about 1.2 million people are obliged to seek a safe, burdened ABC News.