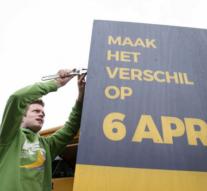 amsterdam - The subsidies for campaigns to Ukraine Referendum are widely misused in order to fill their own bank account. While fraud was not shunned.

According to research from The Associated Press to twenty grant files of a total eighties which makes public the referendum commission on appeal by the newspaper on the Open Government Act.

In half of these twenty grants to legal persons (companies, foundations and political parties) is fraudulent or favoring friends or family. Sometimes the shoddy was so obvious that the referendum commission has asked to return the money. But there are plenty of dubious bills have been paid.

Thus did the youth wing of the Party for the Animals 1200 euros to a company of the webmaster of that party for the design of a website and a Facebook page. GroenLinks rented for 80 euros per hour an 'expert' in which took ten hours to write the full back of a flyer.

At the political party Forza Haarlemmermeer tried a man to declare the purchase of a new suit. He was considering himself as a presenter for hiring a debate, to 3000 euros. In both cases, the referendum commission put a stop, the bills have been paid.

The 'Forum for public debate 'shall repay any grant. For moderating a website a voucher was handed to 23 000, but there were only 1,500 visitors to the site.\n  \n  \n   advertisement

Also Gay Group BV Frederik van den Bosch has been caught by the referendum commission skulduggery. He hired himself through other private companies, for astronomical sums. Many content that does not yield. The government could ultimately recover tax money because the company did not comply with the agreement to organize a neutral campaign. Gay Group was in favor, and only reached thirteen thousand visitors. Striking is a bill of over 900 euros by former gay leader and former VVD council member Frank van Dalen. For 'expertise', said the statement.

The director of the Max van der Stoel Foundation, a foundation of the Labour Party, was clear from his own hours task but what busy 'accompany' a cartoonist and illustrator, and organizing a Facebook campaign. 61 hours to 35 euros cost him this for over a month. The actual performers of the work counted on average one thousand euros per drawing.

The youth wing of the party took it a lot easier. The cartoon showed they make Wilders which kisses with Putin, after all, took the news well. The plate was again much cheaper: the artist charged 350 euros. The Young Socialists showed in the handling of the grant they really a 'party of ideas' are: the concept counted the club namely 700 euros.