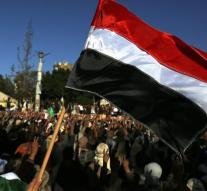 aden - Yemeni soldiers who were in the Aden harbor waiting for the payment of their salaries, have been the victims of a suicide attack. At least a dozen people were killed and at least twenty people were injured.

The perpetrator blew himself according to government sources on the waiting soldiers. That happened allegedly at an army base. It is still unclear who is responsible for the massacre. Similar attacks have been previously claimed by Islamic State.

In Yemen, a civil war raging for about eighteen months. An international coalition led by Saudi Arabia since 2015 fighting against the Houthi rebels and their allies, to give power back to the ousted president Abd-Rabbu Mansour Hadi. In the fighting so far are definitely 10. 000 people were killed.