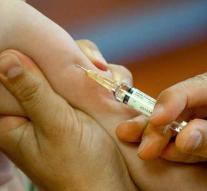 malang - The health authority on East Java wants to vaccinate almost 11 million inhabitants between the ages of one and nineteen years old against diphtheria. The Indonesian province has been dealing with an epidemic of this disease for some time. The province has allocated over 5 million euros for the vaccination program, reports The Jakarta Post Post on Saturday.

According to the head of the health organization, religious persons associated with large organizations such as the Ministry for Religious Affairs and Muslim groups are also involved in the project.

It is expected that many Muslims will oppose the injections, because they doubt whether it is permitted according to their faith. 'Some people have doubts about the vaccinations. We anticipated this by involving religious people. Vaccination is important, 'says the head of the health organization.

Last year, 460 people contracted the disease in East Java. Sixteen people did not survive the disease.

The vaccination program will be carried out this year in three phases.