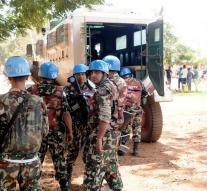 kinshasa - The UN Peace Mission has found 38 new suspected mass graves in the Kasai region in the Democratic Republic of the Congo. Since the outbreak of an uprising in August, about eighty such graves have now been discovered.

A UN spokeswoman declared in the capital Kinshasa that the tombs were exposed during a joint operation with the Congolese army. How many bodies in layers are not disclosed.

Last month, the Roman Catholic Church announced that since October 3300 civilians were killed by fights between the Congolese army and insurgents. The fighting broke out after the army had killed a tribal chief demanding the departure of the government forces.