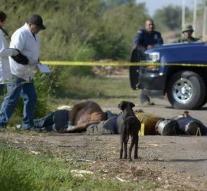 mexico city - The Mexican police found the bodies of eleven men and three women in a mass grave at the tourist resort of San Jose del Cabo. Authorities try to identify the victims who found Tuesday and Wednesday through DNA tests, reporting the charges to the state of Baja California on Thursday (local time).

The city is located on the Baja Peninsula, where there is a lot of drug-related violence between rival gangs. A forensic team is looking for more rests.

About thirty thousand people are missing in Mexico since a massive increase in drug abuse since 2007.