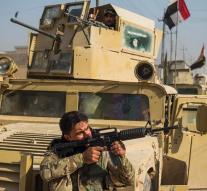 baghdad - The Iraqi army in a town south of Mosul discovered a mass grave with an estimated hundred decapitated corpses. The town of Hammam al-Alil Saturday was freed of the terrorists of the Islamic State.

The Iraqi army, together with Kurdish units for three weeks on the rise toward Mosul, the third largest city in the country that is IS in hands. Lives in the city an estimated 1.5 million people. IS it with a view to advancing Iraqi forces hundreds of people have been captured to use them as human shields.