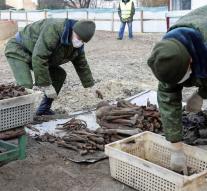 brest - In Belarus a mass grave was discovered from the Second World War with the bodies of hundreds of Jews. When building apartments in the center of Brest, near the border with Poland, came across...

Soldiers were deployed to clear the remains of the murdered Jews. They get a new grave in the north of Brest, the city council has proposed.

According to the commander of the army unit that is doing the excavation, 730 bodies have been recovered so far. He does not rule out that more can be found.

The Germans occupied the former Soviet republic of Belarus in the Second World War and killed tens of thousands of Jews there. The spot of the grave was part of the Jewish ghetto.