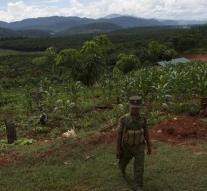 rangoon - In Myanmar a mass grave was discovered with 28 deaths, including several children. According to the army, it is Hindus killed in a robbery by rebels of the Muslim minority Rohingya.

The mass grave is located in the state of Rakhine, where from late August more than 430,000 Muslims have fled to neighboring Bangladesh. In Myanmar (formerly Burma), the vast majority of the population is Buddhist.

The army holds the Muslim assault group ARSA (Arakan Rohingya Salvation Army) responsible for the murders. 'These 28 people were cruelly killed by extremist ARSA terrorists,' said the army on Monday. The ARSA denies sitting behind the murders and says no killers are killed.

At the end of August, the ARSA attacked military and police stations, which resulted in a new escalation. Then the army started a big action in the area. The United Nations (UN) is talking about 'ethnic cleansing'.

In addition to Muslims, some tens of thousands of Buddhists and Hindus from Rakhine are on the run for fear of violence.