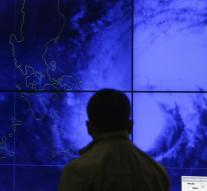 - The Philippines are braced for Typhoon Melor. As a precaution evacuated about 750,000 residents of the central part of the island group. Furthermore forty domestic flights canceled, many schools and offices closed and must remain in the hundreds of harbor ferries and fishing boats.

Melor has already come ashore. The typhoon has hit the northern tip of the island of Samar. There are winds of up to 150 kilometers per hour. Furthermore warn authorities to heavy rains that can cause flooding, high waves and landslides. Melor expected to reach later in the day the densely populated island of Sorsogon, some 400 kilometers southeast of the capital Manila.

Meteorologists say Melor a very " compact typhoon " is. This prevents possible that arise far from the center of the typhoon devastating effects. The natural phenomenon currently adopts approximately the same path as Typhoon Haiyan, which claimed nearly 8,000 lives in 2013.

The leadership of the national disaster management expects a number of places will drop the power and communications facilities. For twenty provinces, including the area around the capital Manila, the weather service issued a rain and storm warning.