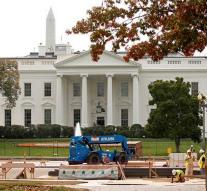 - A masked man with a gun was arrested Saturday near the White House in the US capital Washington. An agent of the Secret Service could overpower the suspect, Post The Washington Post.

The officer confronted the man Saturday afternoon because he was wearing a holster with a gun. This launched a struggle, after which the accused could be arrested. It is still unclear why the man was walking around with a gun and a mask.

The suspect faces a hefty punishment. According to the Secret Service, he is being prosecuted for carrying a weapon without a license, walk around with unregistered ammunition, resisting arrest and committing a crime while he was masked.