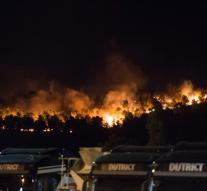 - The large wildfire north of Marseille is under control, the fire department reported in the southern French port city Thursday. More than 2500 hectares went up in flames. West of Marseille, Fos-sur-Mer, burned 800 hectares of nature off.

Marseille airport is open again, but warns that flights may be canceled if the fire department sees fit. Also, do not open all the roads around the airport. Who wants to go to the airport from Marseille can go best with the train.


More than 1,800 firefighters from across France were in line to fight the fires. The fire was fueled by high winds. Also, it is extremely dry in the area. It has been there for weeks not rained. For the next week, too dry and hot weather predicted, but with less wind.