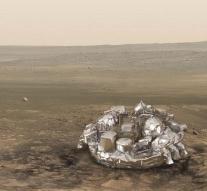 darmstadt - The Mars Lander Schiaparelli appears to have crashed on landing on the red planet. The probe may be exploded. The fate of the lander was long unclear.

The Schiaparelli, together with the satellite Trace Gas Orbiter (TGO) flew to Mars. That satellite was indeed Wednesday without any problem in orbit around Mars. The probe must look for gases in the atmosphere. Scientists are particularly interested in methane, a gas that might indicate minor forms of life on Mars. ESA boss Jan Wörner said that success is 'amazing.'