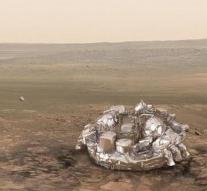 darmstadt - A calculation error, the European Mars Lander last month proved fatal. The on-board computer was faulty measurements. The system therefore concluded that the lander was below the surface of the planet. In reality, he was in full flight at 3.7 kilometers.

According to research by the European Space Agency Wednesday brought out. The organization speaks of a 'negative altitude estimation. 'Due to incorrect measurement lander threw his parachute off the brake and went briefly.

That could only be done in the final seconds before landing. Without inhibition he hit to pieces of kilometers altitude and he exploded.

The landing of the Schiaparelli laboratory was an experiment designed to test the technology for a landing on Mars. Europe is around 2020. These include sending an unmanned scout moving to the red planet.