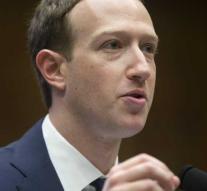 brussels - Facebook CEO Mark Zuckerberg arrives at the European Parliament in Brussels on Tuesday at 6 pm to explain the misuse of personal data from some 2.7 million Facebook users in the EU. The American is received by President Antonio Tajani.

The meeting of Zuckerberg with the parliamentary leaders starts at about 6 pm. They want to know how the British company Cambridge Analytica could get hold of the profiles of tens of millions of Facebook users. Data were used for other purposes without the knowledge of the account holders, such as Donald Trump's election campaign. The politicians also want the guarantee that something like this will not happen again on behalf of EU citizens.

The consultation is broadcast live via a webstream. First the meeting would take place behind closed doors, but a number of political groups did not agree with that. In addition to Tajani, the rapporteur of the Civil Liberties Committee is also involved.

Tajani will hold a press conference at 7:30 PM.