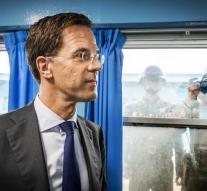 - Prime Minister Mark Rutte has been captured by a North Korean soldier in the photo. The prime minister visited the border between North and South Korea during a trade mission in the area.

The visit of Rutte needs to further strengthen diplomatic and economic ties between the Netherlands and South Korea.

Rutte is accompanied by Secretary Martijn van Dam and Guus Hiddink, former national coach of the South Korean football team. Today is the last day of their three-day trip.