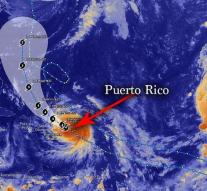 san juan - Hurricane Maria arrived on the American island of Puerto Rico on Wednesday, where about 3.4 million people live. The storm made buildings in the capital of San Juan shake on their foundations. There also flew through the streets.

Maria is the most powerful hurricane who has drawn across the island since 1928, when about three hundred people died. The storm had already caused a ravage on the islands of Dominica and Guadeloupe. Thousands of Puerto Ricans have sought safe shelter in shelters.

The authorities in Puerto Rico have warned of large-scale inconvenience. 'We have not previously experienced an event of this magnitude in our modern history,' Governor Ricardo Rossello said in a televised speech on Tuesday. He warned that great damage seemed to be inevitable.

The American National Hurricane Center predicted that some 66 centimeters of rain could fall on the island. Life-threatening storms, floods and mud currents can also occur.