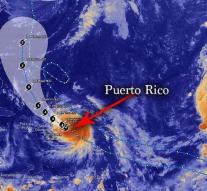 san juan - The entire island of Puerto Rico is devoid of electricity by hurricane Maria. That reports security officials against the BBC.

The island has 3.5 million inhabitants. According to Abner Gómez, head of the disaster team, the hurricane has destroyed everything on its way.

The extent of the damage is not yet known. 'But the information we have is not encouraging. 'The American National Hurricane Center predicted all life-threatening storms, floods and mudflows.