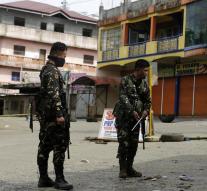 - The Philippine Armed Forces have expelled extremists from terrorist groups from most of the city of Marawi. 'Our commanders on the spot have assured us that the end is almost in sight,' said Brigadier Restituto Padilla Monday in Manila.

About 60,000 people were fleeing for the fighting between the army and the Maute group last week. The violence allegedly killed 19 citizens, 18 soldiers and 61 extremists, according to the authorities. It is feared that extremists act as refugees to be able to attack elsewhere.

The largest part of Marawi, where formerly two hundred thousand people lived, would now be in the hands of the army again. Government forces do not hold only 'certain areas', said Padilla. He indicated that 'precision bombardments' are necessary to turn off surviving fighters.