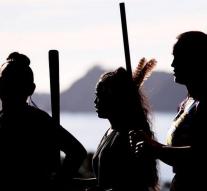 wellington - In New Zealand, the native Maori residents have stopped plans to win drinking water from the source of a river. The Raukawa tribe successfully appealed against the intention of a liquor company to take 6.9 million liters of water daily from the Waihou River on the Norwegian island and fill it in bottles.

The regional council of the Waikato region, in any case, put the project on Wednesday in October. The Maori's say that the spring water is holy and also has healing powers. When the water is drained it loses its mind and strength. In addition, it would disturb the Raukawa's relationship with the river, the complaint resigns.

For the New Zealand native population, water is the basis of all life. One of her statements is: 'I'm the river, and the river is me. 'In pursuit of the Maori's, New Zealand in the spring also granted a river the same rights as a natural person for the first time.

When a final decision on the drinking water project is taken, it is not yet established. Beverage producer New Zealand Pure Blue had announced in the region to build the 'Southern Hemisphere Bottle Factory'. The source water would be entirely intended for export.