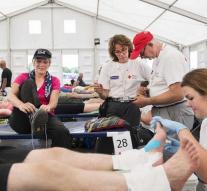 - The medical posts to the second walking day of the Four Days had their hands full of runners who were suffering from the heat. To 16:00 224 people were treated by the Red Cross, largely because of heat complaints.

The Nijmegen hospitals reported that several dozen hikers have been introduced, which could all go home after treatment.

Wednesday additional rescuers, a motorcycle ambulance and sent to a special koelbus Waal bridge at Nijmegen. Many runners were looking after the hot cooling bridge under the bridge pillars, but instead there were faint. That's according Four Doctor Ernst Paul van Etten because the calf muscles suddenly not have to work anymore. That affects the blood circulation.


The Red Cross counts on until late in the evening to be busy with blisters and heat complaints.