Home / World / Many people killed in bus accidents in the Philippines 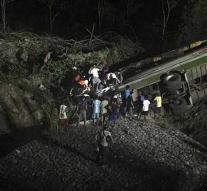 manila - A serious bus accident in the Philippines has killed at least nineteen people. More than ten people were injured, reports the police.

In the province of Occidental Mindoro, south of the capital Manila, the bus crashed into a ravine, after the vehicle had crashed against the barrier of a bridge. According to the police, the bus dropped down about fifteen meters.

It is being investigated whether a technical defect or a mistake by the driver was the cause of the accident.