Home / World / Many less agents injured during the G20 summit 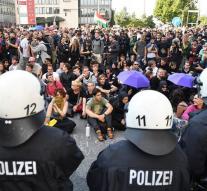 hamburg - The number of police officers affected by the violent protests around the G20 summit in Hamburg is significantly smaller than previously assumed. The police in the German city showed Sunday that at least 476 agents had been injured. It appears Friday to 'only' 231 agents, almost half less.

The reason for the difference is the timeframe held by the police in Hamburg. The 476 injured police officers are the result of a census between June 22 and July 10, a police spokesman said. The number of agents who got injured during the summit, a count that runs from 7 to 9 July, was a lot lower, namely 231 agents.

The previous count also gave a high result because injuries also included dehydration, circulatory problems and such 'conditions'. Many agents did not feel comfortable due to the warm weather during the summit.