Home / World / Many killed by explosion in downtown Ankara 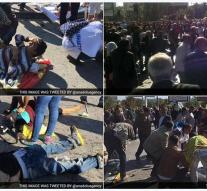 ankara - An explosion in the center of the Turkish capital Ankara are at least twenty people died. The death toll likely runs, Turkish media reported Saturday. The blast was near the main train station of the city.

According to first reports, a man with a bomb belt blew himself up in the audience.

At the place were many supporters include the Kurdish Party for Peace and Democracy and the People's Democratic Party together. A peace march against the armed conflict between the Turkish army and fighters of the Kurdistan Workers Party PKK was on the verge of beginnen.

There are also reports of a second explosion in the neighborhood. Emergency services are on site.