Home / World / Many kill by attacks in Syria and Iraq 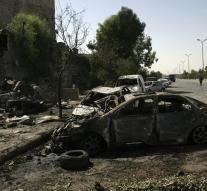 damascus - On a car bomb attack in a busy district in the Syrian capital of Damascus, Sunday is definitely twenty dead and many dozens injured. That made the Syrian Ministry of Foreign Affairs known.

According to the Syrian authorities, two other attacks with car bombs could be blamed by security forces at the last minute.

Also in Iraq Sunday was a bloody attack. In Anbar province, fourteen were killed and ten injured in a suicide attack in a refugee camp, reports the news transmitter Al Arabiya.

The authorities in Anbar suspect that Islamic State is behind the attack.