Home / World / Many kill by attack on Afghan mosque 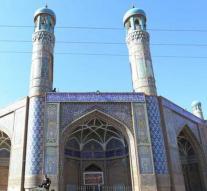 herat - A suicide attack on a shiite mosque in the West Afghan city of Herat killed at least 25 people on Tuesday. That is the number of deaths brought to the largest local hospital according to a spokesman for the provincial ministry of health care. There are also 35 injured.

The authorities try to see if victims have been taken to private clinics. It is feared that the death toll will still increase. The responsibility for the bombing has not yet been claimed. In recent months, Sunni IS terrorists have especially killed and destroyed Kabul's capital.