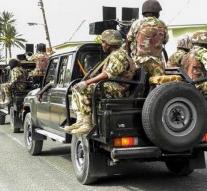 maiduguri - In the abduction of a team of oil seekers by Boko Haram and a subsequent liberation campaign in Nigeria, many deaths have fallen. Notifications about the number of fatal victims range from thirty to almost fifty.

Islamic militants would have kidnapped a research team for oil from Nigerian state oil company NNPC at Lake Chad. The region around the lake is controlled by Boko Haram's fans.

The government set up military and mercenaries to release the team. In a firefight there were many deaths, including eighteen soldiers and employees of an oil company. The abduction and rescue action would have taken place last Tuesday.