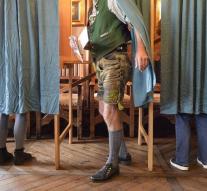 berlin - The rise for the German Bundestag elections is significantly higher at noon than Sunday at the same time during the 2013 elections.

In Hamburg, 37.4 percent of the electorate voted for 11.00 hours. Four years ago, according to the Statistics Netherlands, North was 35.4 percent at the time. In Bremen, at noon, 27.1 percent voted against 24.9 percent four years ago.

In the state of Baden-Württemberg, the rise is also higher in the afternoon: 19.6 percent, a half percentage point more than four years ago.

According to a spokeswoman in Potsdam, long rows were outside the polling stations. In the state of Saxony-Anhalt, 29.6 percent of the electorate had already voted before 12.00. Four years ago it was 25.8 percent.

Some states, on the other hand, report a peaceful start to the elections. In Saxony, the rise around noon remained unchanged. In the state of Thuringia, the counter stood at 24.5 percent against 31.2 percent in 2013.

Around 15.30, the first official national rate of return is announced.