Home / World / Many dead on boat with refugees 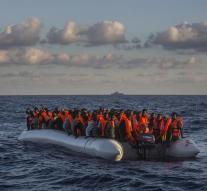 rome - The bodies of 21 women and one man were found Wednesday in a large rubber dinghy with refugees that was discovered in the Mediterranean. Doctors Without Borders (MSF) has taken the dead and more than two hundred survivors aboard one of its own ships.

MSF provided no further information about the rescue.

This year, about 79 861 immigrants managed to reach Italy overseas. Approximately 3,000 refugees took it and died on the way or are missing at sea, as calculated by the International Organisation for Migration.