Home / World / Many dead in IS attack in al-Bab 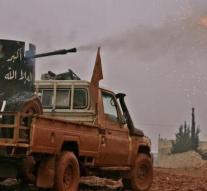 ankara - When an attack of Islamic State in the Syrian town of al-Bab, according to the Turkish military Sunday least thirty civilians were killed and many others got injured. This was announced Monday.

Al-Bab is already weeks under siege by Syrian rebels supported by the Turkish army. According to the army tried IS to prevent the attack that residents leave the city. They now serve more as a human shield.

The Turkish army began nearly four months ago an operation in Syria to dislodge fighters of both IS and the Kurdish PKK in the border area.