Home / World / Many dead in attack on mosque Nigeria 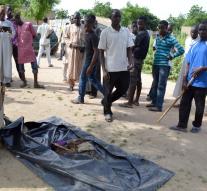 maiduguri - A double suicide attack on a mosque in northeastern Nigeria on Thursday least 30 people killed and many people injured. A bomb went off in the prayer house in Maiduguri . The other exploded when victims tried to flee, the BBC reports based on a fuctionaris to the emergency services in the city.

The attack has not been claimed , but it is expected that terrorist group Boko Haram is responsible.

In Maiduguri his frequent attacks. On Tuesday, seven people were slain and eleven injured by three suicide bombers.

End of September fell in one day 46 killed in three bombings in the city . Even when a mosque was the target.