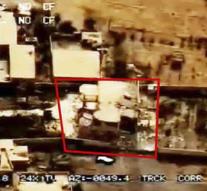 damascus - Certainly 43 people were killed in the east of Syria on Saturday in an air strike by the US-led military coalition. The dead are mainly civilians, including seventeen children and twelve women. That reports the Syrian Observatory for Human Rights,

The bombing took place at sunrise and found houses in the village of Hajin on the border with Iraq. There Kurdish troops are currently fighting with American air support against Islamic State.