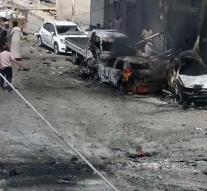 This was announced by Human Rights Watch Wednesday, after it previously did research this month. The explosives meant to kill or maim people were placed by terrorists of the Islamic State controlled the Syrian city.

HRW urged the names of 69 people, including nineteen minors, who died patched together by bombs in schools, homes and streets during and just after the battle Manbij. Because the human rights organization not in all districts and villages in the area could gather information, its conclusion that the actual death toll must be much higher. Hospital staff told to have treated hundreds of wounded.

' IS undermined before the retreat blew literally everything, to the sinks to it, '' said Ole Solvang HRW. The explosives were in the refrigerator or television, under a mattress, a pile of shoes or clothing to windows or doors. They went off when returning the displaced residents.