Home / World / Many agents injured in riots in Hamburg 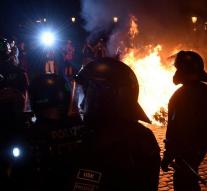 hamburg - In rioting between protesters against the G20 summit and the police in Hamburg, 76 were injured on Thursday. Three agents were transferred to the hospital for their injuries. The police have no information about the number of injured protesters.

Two pilots of a police helicopter were injured after having been laserized in their eyes, so they could not fly any further.

The police opposed the participants to the March Welcome to Hell (Thursday welcome) Thursday night because about a thousand protesters had covered their faces. Those protesters blamed agents with bottles and other objects, police said.

The protest march organizers report that there were ten and twenty protesters arrested. Shortly before midnight the march ended. According to the police, at the beginning of the night there were still devastations and burns at various places in the city, but it became quieter in the city around 01.00.

'There is no justification for violent protests and I am convinced that the police will do anything to stop protests,' said Chancellor Angela Merkel in an interview in the newspaper Zeit on Wednesday. 'Who uses violence denies democracy. 'Government spokesperson Steffen Seibert responded to the riots on Thursday evening, repeating Merkel's statements.

The protest march organizers accused the police of out-of-proportion action. According to them, the police had already acted before the demonstrators were given the opportunity to finish their face cover.