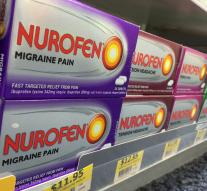 sydney - Reckitt Benckiser must be ordered by the courts in Australia pick up some of his painkillers on the market. The British company has misled the public by bringing different types of painkiller Nurofen market while the contents of the funds was the same.

Pain fighters for back pain, menstrual pain, migraine and tension headaches are in fact identical, the federal court ruled. The case was made ​​by the Australian Institute for Consumer Protection. The price for the disputed funds was nearly double the standard painkiller Nurofen.

Commenting on the verdict wanted a spokeswoman for the company did not say in which countries the specific versions more are for sale. According to her, the situation in Australia is not directly applicable to other countries.