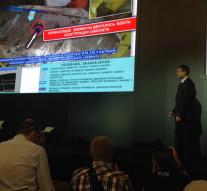 moscow - The Russian state Almaz Antey, producer of the Buk missiles which the Boeing 777 Malaysia Airlines would be knocked down last year, shifts all blame for the attack in the shoes of Ukraine . During a press conference Tuesday in Moscow tried to cleanse Russia of all blame the manufacturer.

According to the manufacturer, the weapon fired type Buk missile only used by the Ukrainians. Russia already uses a different type of missile, said a representative of Almaz Antei at the press conference.

The presentation must be seen against the background of the information war that more than a year between Moscow and The Hague is underway, with the Kremlin Netherlands accuses of bias. Our country would have provided information that the Russians have systematically ignored.
PR war

Nine out of ten Russians are still convinced that the "neo-fascist" regime in Kiev is to blame for the disaster which took on July 17 last year to 298 deaths.

Tuesday at 13:15 presents Tjibbe Joustra of the Dutch Safety Board, the conclusions of the final report on the cause of the crash, why the plane flew over a war zone, why the days passed before there is clarity came over the passenger list of MH17 and whether the occupants of flight MH17 anything from the crash have been given.