Home / World / 'Manning did not put US troops in danger' 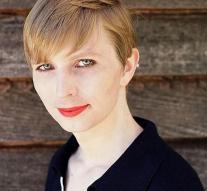 washington - The publication of documents by Chelsea Manning had 'no strategic impact on the US war effort in Afghanistan and Iraq.' In 2010, Manning released about 700,000 secret documents about US troops in these two countries through WikiLeaks.

That analysis was released on Wednesday by the US Department of Defense, the Guardian reports. Manning, then soldier Bradley Edward Manning, was arrested in Iraq in May 2010. He turned the prison for espionage and theft. He was not found guilty of helping the enemy, a serious offense. Manning was nevertheless given 35 years of cell.

Manning continued to get the news because he changed his detention of sex and became a woman: Chelsea. President Obama granted Manning grace on January 17, just before his last deadline. The 29-year-old Manning was released in May. She explained in an interview that she had no idea at the time to start a discussion about the destruction and chaos she had seen with her own eyes.