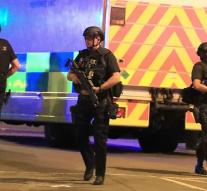 manchester - The explosion in the Manchester Arena seems the work of a suicide terrorist. First indications would indicate that. That says two anonymous US officials against a Reuters reporter in the UK.

The police in Manchester handles the explosion, leaving at least 19 people, as a terrorist attack.