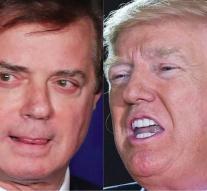 washington - Donald Trump's former campaign leader had offered a Russian billionaire to keep him informed about the state of affairs of the US presidential election last year. According to the Washington Post, it was not yet two weeks before Trump became the Republican candidate.

The newspaper is based on anonymous sources. Ex-campaign manager Paul Manafort offered by e-mail to keep Oleg Deripaska, an aluminum magnet, informed about the elections.

'If he needs private briefings, we can facilitate that,' he wrote to an intermediary on July 7. Deripaska has close ties with the Kremlin and had previously done business with Manafort, setting the sources.

According to the Washington Post, there is no evidence that there has actually been a meeting. Neither whether the offer has arrived at the Russian businessman.