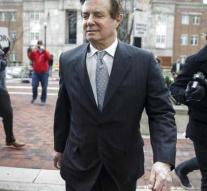 washington - Trumps ex-campaign leader Paul Manafort has filed a petition with a federal court that the charges against him will be rejected. According to Manafort, special prosecutor Robert Mueller has exceeded his jurisdiction because he wants to prosecute Manafort for crimes that are not related to his investigation into possible Russian interference in the 2016 American elections.

In a 46-page thick document, Manafort's lawyer at the District Court in Columbia has explained that his client is threatened with additional charges such as money laundering and illegal lobbying. According to the request, Mueller must only deal with matters concerning Russian interference.

The special prosecutor has received permission for a broader investigation. ' However, that extra power is not a blank check, 'says Manafort's lawyer.