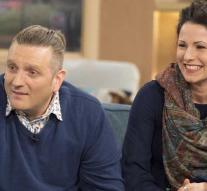 - The man who is now known at home and abroad that he was deflowered at the age of 45 after doctors had created a penis for him, has become seriously ill. A week after he could finally have sex with his wife for the first time, she found him unconscious on the floor.

Andrew Wardle (45) from Manchester was born without a penis. After a 10-hour operation, doctors have succeeded in providing him with a genitals, made from the skin of his forearm, the nerves from one leg and an artificial erection system.

This to the great joy of Andrew and his wife. The result was fantastic, as he told The Sun before: 'He is big, ridiculous. 'His friend Fedra (28) agrees:' Indeed. He is big. '

Unfortunately, the couple could not enjoy their pink cloud for long. Andrew became ill. First flu and a lot of vomiting, then Andrew lost his consciousness. Fedra found him on the ground and quickly turned to help.

The worst illnesses were thought. The couple also feared that the coma was caused by their bedtime adventure. In the end, Andrew turned out to have a disease on his gallbladder, Metro knows. Meanwhile, things are going a lot better with him.