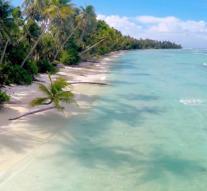 sydney - Winning a tropical resort in a lottery. Whose dream is not it? It happened one Joshua out of the Australian state of New South Wales. He bought a lot of 49 Australian dollars and won the Micronesian paradise resort, located in a remote part of the Pacific Ocean.

The family who run the resort hotspot did not simply transfer it to the highest bidder. The probability that there would be an investor who ignores the fragile environment was too large in their eyes. And so the Australian owners Doug and Sally Beitz organized a lottery. The winner was announced Wednesday. More details about the lucky still missing.

Older couple returns to Australia to spend more time with the grandchildren. In their own words they convey a completely healthy now. The local staff will move to the new owner. The residence has sixteen rooms.

The winning number was 44980. 'The life of the owner of that lot will change dramatically,' said Doug.