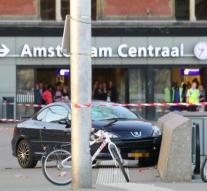 amsterdam - The 45-year-old motorist who injured seven pedestrians on Saturday night at Amsterdam Central Station still stuck on Monday. According to a spokeswoman, the police want '100 percent' to be sure of the occasion of the collision. Two people are still in a hospital. They have bone fractures, said the spokesman.

It still looks like he has become unwell because of low blood sugar levels. 'We are doing the latest checks on his diabetes story,' said the spokesman. 'He is very cooperative and finds it terrible what has happened. 'The Amsterdammer says nothing more about reminding the incident.

The driver was attacked by agents on Saturday because he drove on the tramway. He got a fine, after which the police told him how to get back on the normal lane. The man then drove off footsteps, but suddenly made a good speed and went up the pedestrian area from the tramway. Here he stopped at the concrete edge of the metro entrance. According to the saying, the agents did not get the impression that he did not feel well. 'Then they would have acted differently. '