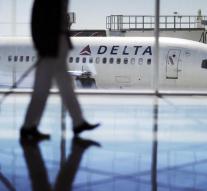 seattle - A passenger attempted to open the emergency door of the plane during a flight from Seattle to China. Friday he was accused of attacking airline personnel.

According to the FBI, 23-year-old Joseph Daniel Hudek IV from Florida had pushed the door of the door halfway down. When a flight attendant and a fellow passenger stopped him, they got a blunt. After a second flight attendant hit him with wine bottles and interfered with other passengers, the aggressive passenger of Delta Air Lines could be overcome. He was tied up with tiewraps.

It is unclear why the man who traveled first-class tried to open the plane door. According to the FBI, the passenger had a beer, but did not show signs of drunkenness. He is in danger of imprisonment for up to twenty years.

The plane returned to Seattle after the incident.