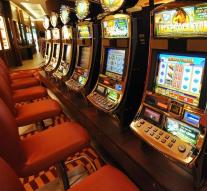 las vegas - An American from California who threw only three dollars in a machine at a casino in Las Vegas has gone home with a $ 11.8 million jackpot.

Rodolfo T. Experienced the vacation of his life at the Fremont Hotel in the American gambling town. He wanted to try his luck on one of the fruit machines and quit three dollars. A little later he saw the dizzying jackpot of almost 12 on the screen of the vending machine.

Casinos manager Jim Sullivan says to US media that it's one of the biggest profits ever. 'In the sixty-year history of Fremont, Las Vegas, thousands of jackpots have already been won, but not as big as these,' said Sullivan.